Date: 2010-06-17
Build a new Beichuan
During the Wenchuan Earthquake occurred in southwest China on 12 May 2008, Beichuan Qiang Autonomous County was almost totally ruined. Premier Wen Jiabao made a solemn promise that “We will build a new Beichuan”. With strong sense of responsibility, SDLG responded quickly and donated machines and money for the disaster relief, which set up a good brand image. 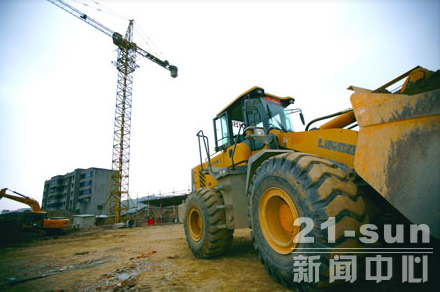 Reconstruction work
Lei Gu Town was one of the seriously damaged towns in the Wenchuan Earthquake. The reconstruction of the town is conducted by Shandong Province. SDLG was the major force in the reconstruction work. One year and a half passed, multiple blocks and buildings of Qiang style has been finished, and the construction work is still in progress. SDLG excavators and loaders can be seen everywhere.
Jing Jianqiao is a contractor for the low-rent housing project in Anchang town. He has a LG952 and a LG953 loader on the construction site.
Mr. Jing also operates SDLG loader by himself. He says that only small parts have been replaced on the machines. Once there was leakage in the cylinder of LG953, the service staff arrived in one hour and replaced the cylinder timely.
Mr. Jing is satisfied with SDLG machines. He said that he would not buy other machines as SDLG machines were flexible and had low trouble rate. He also rents the machines in unoccupied period, as SDLG machines are very popular. According to a local dealer, he may buy another two sets of SDLG machines.
SDLG loader operator Chen Yun’an is working on low-rent housing construction project in Anchang County. Mr. Chen has operated loader for 10 years. He has worked on SDLG loader for 3 years. He said that SDLG loader was very flexible and had timely services, which provided him peace of mind.
Zhang Heng was a SDLG loader operator in the new Beichuan. He has operated loaders for 9 years and worked on SDLG loader for 4 years. He is familiar with LG950, LG952 and LG953. He is very satisfied with SDLG loaders and he expects the machines to add pilot function, which will save much efforts.
According to Zhang Heng, SDLG loader has reasonable design, especially in the hydraulic system, and also features high flexibility, high efficiency and low trouble rate. He expects the machine to work for at least 3 years, and even 7 years with proper service and maintenance.
Zhang Heng has already worked in Beichuan for 10 days. He feels a little bit lonely as he works by himself on the site, so he whishes there is audio system on the LG952.

Reliability in Action
"SDLG loaders have favorable prices and high adaptability in rough terrains, high reliability and excellent parts supply, as well as timely aftersales services” He Yonggao, Sales Manager of Sichuan Changcheng Machinery Company said. Sichuan Changcheng Machinery Company is one of the 46 SDLG sales outlets. The company mainly deals with the sales of SDLG machines, parts supply, after sales services and equipment rental. Last year, Mr. He sold 800 sets of SDLG loaders, and his plans to sell 1200 sets this year.
During the disaster relief for Wenchuan Earthquake stricken areas, SDLG donated loaders valued 2.18 million RMB and cash of 550,000 RMB, and sent rescue team to the site. At present, there are more than 100 SDLG machines working on Sichuan’s reconstruction.