As the most influential Chinese construction machinery brand as well as a leading industrial enterprise with the highest market share in Russia, after the debut success in 2011, SDLG teamed up with famous local agents again to appear at this year’s exhibition with the theme of “Cooperating for Win-win and Winning through Services”, to demonstrate its reliable products to customers in Russia and from the rest of the world, thus boosting its international image. This year’s event displayed SDLG’s six best-selling loader models in Russia. SDLG’s booth, highlighted by yellow and mixing machinery, auxiliary appliances and service vehicles, became the grandest and finest iconic booth at the exhibition, attracting wide attention. An army of customers in Russia and from regions like Eastern Europe and Central Asia made inquiries and test-drove the exhibits. Exquisite process and humanized scientific design gained high praise from experiencers. A number of SDLG’s old customers were attracted to SDLG’s booth to inquire about its new products and negotiate about new machinery purchase. Many orders were placed as a wonderful stroke in SDLG’s process of internationalization. 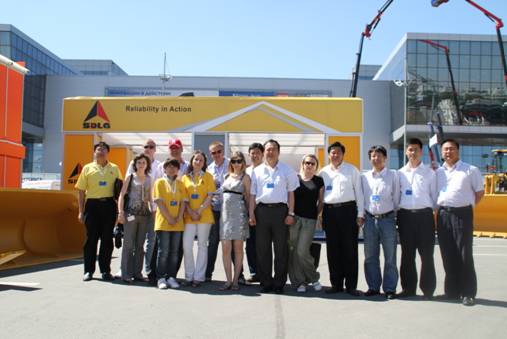 Profile of CTT
Sponsored by MEDIA GLOBE, with the strong support of IMAG (international division of Munchen International) and Russian Constructors Union, CTT has become the largest construction machinery exhibition in Russia, Central Asia and Eastern Europe. The event, held annually, attracted over 800 exhibitors and over 40,000 visitors from countries like China, the U.S., Germany, Italy, France, Sweden, Russia, Australia, Japan and Korea.