Date: 2013-10-28
As SDLG construction equipment expands into North America, its Turlock, California, store will serve as the flagship for a network of experienced dealers.

SDLG recently celebrated the opening of itsfirst store in Turlock, California,launching the company’s retail efforts in North America. The 10,000-ft² store, named VCES, is the brand’s first dedicated brick-and-mortar location in the region. Its grand opening marks the launch of SDLG’s dealer network.

Representatives from the SDLG dealer network and customers gathered at the store on October 24to celebrate the occasion. Alan Quinn, director of SDLG North America, welcomed the attendees, as well as John Lazar, the mayor of Turlock, and Mike Mathews, VCES president. The event included speeches from honored guests, a ribbon-cutting ceremony, and demos and test drives of the LG959 and LG938L wheel loaders.

Quinn said the opening of VCES is an important milestone for SDLG’s rollout into North America.

“We’re very excited to launch our new dealer network in North America, and we couldn’t think of a better place than Turlock,” he said. “It’s surrounded by a thriving agriculture industry and we have already connected with lots of excited customers who are interested in SDLG wheel loaders. We are honored to become a part of this great community.” 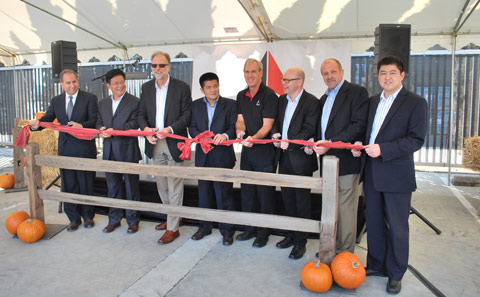 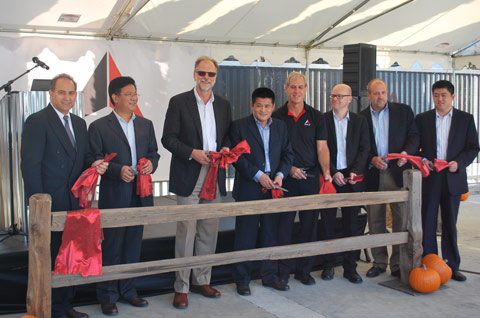 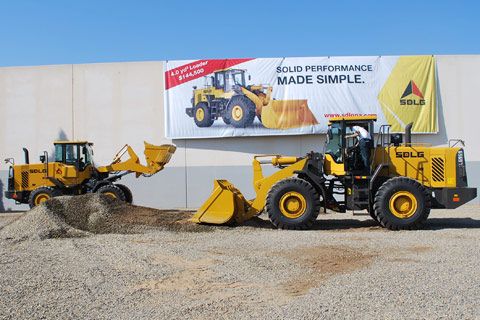 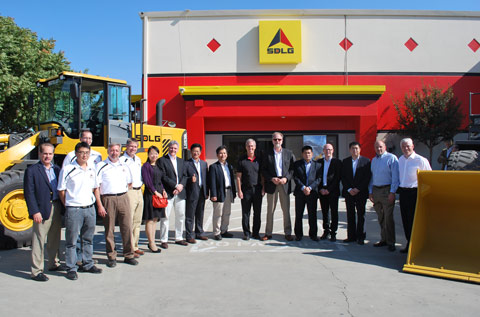 The SDLG dealer network, composed of seven companies in 12 locations,will sell the company’s field-proven construction equipment, as well as provide thorough parts and maintenance support.Each of the dealers in the network is equipped with a complete

service center that offers customers a one-stop-shop for service and warranty work. Highlytrained technicians at each location are able to work on SDLG machines “from axles to engines.” A central parts depot in Atlanta, Georgia, will supply parts to all the dealers. All SDLG machines are fully backed by 12-month, 1,500-hour warranties.

Backbone of North American rollout
Quinnsaid SDLG’s dealer network is made up of knowledgeable dealers with many years of experience working with construction equipment.

“This is a top-notch group of dealers whoreally know the business,” he said. “SDLG will be supported by companies that have been selling and servicing construction equipment for decades. They are the backbone of SDLG’s rollout into North America and we couldn’t bemore confident inthese dealers’ ability to serve the market.”

The dealer network locations include:

-      Construction Machinery Industrial of Anchorage, Alaska. Established in 1985, this Alaskan-owned business operates from four locations, selling and renting construction and mining equipment, as well as providing parts and service support for a range of brands.

-      Redhead Equipment of Regina, Saskatchewan, Canada. Founded in 1948 under the name W.F. Fuller Machinery Limited, thisdealer hasreceived several awards for its work in the construction industry.

-      ASC Construction Equipment of Bismarck, North Dakota; Buford, Georgia; Charlotte, North Carolina; and Piedmont, South Carolina. This company is a leader in the distribution, rental, sales and service of construction equipment for both the construction industry and public works sector.

-      VCES of Turlockand Fresno, California. VCES Turlock is the SDLG 10,000-ft² flagship store. Both the Turlock and Fresno locations will provide full parts and service support for SDLG.

-      ROMCO Equipment ofDallas and Houston, Texas. This family-owned business was founded in 1961 and has eight branches that cover more territory than any other dealer in Texas.

-      Vantage Equipmentof Syracuse, N.Y. This construction equipment provider was established in 2004 to serve upstate New York. The company also supplies the paving, material handling, drilling and sewage markets, among others.