Date: 2010-12-13
At bauma China 2010, SDLD exhibited a full series of products on a dazzling booth, to boost brand promotion and upgrade its internationalization strategy. A chain of SDLG’s big moves in product and brand promotion this year has drawn wide attention. In terms of products, SDLG has yielded abundant fruits from the launch of the excavator line early this year, to production and sales of over 10,000 energy-conserving and emission-reducing units in July, to volume manufacture of 21t excavators, and to the signing of the project with an annual output of 10,000 excavators in November. In terms of brand promotion, SDLG’s nationwide road show of energy-conserving products has boosted its influence in the country; a slate of moves such as CCTV advertising and sponsoring China Football Super League (CSL) have made SDLG pioneer a new era of brand promotion in the industry. The year’s bauma China has further intensified the internationalized promotion of SDLG’s brand. 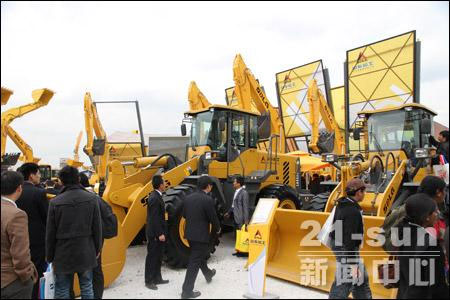 Full series exhibited, new excavators draw attention
At bauma China 2010, a full series of SDLG’s products were on show. Highlighted by energy-conserving loaders, combined with road machinery such as grader and roller, the show was the most comprehensive display of SDLG’s products in recent years. Besides, SDLG introduced four new excavator models: 6210, 6150, 6250 and 6300. The flagship LG6210 is a cost-effective and multifunctional high-caliber hydraulic excavator according with international trends, integrating advanced international technologies, and particularly tailored to complex industrial and mining operations. Excavator is the most profitable and promising product in the construction machinery industry. The explosion of China’s excavator industry this year has benefited a number of domestic enterprises. As a leading brand in China’s construction machinery industry, SDLG boasts a solid industrial foundation, with Volvo’s strong technical and financial support, SDLG will walk more steadily on the road of excavator development. Within a year, from product line launch, to volume manufacture of 21t excavators, to the signing of the project with an annual output of 10,000 excavators, and to the appearance of four new models, SDLG has displayed to the industry again its ambition and confidence to development excavators and broadening product lines. The fresh force will adequately affect the future of excavators and the development layout of China’s construction machinery industry.