Date: 2018-09-19
Infrastructure projects are a key part of the Belt and Road Initiative (BRI) and SDLG wheel loaders and motor graders are widely used in various countries and regions that are part of the BRI’s Silk Road Economic Belt and the 21st Century Maritime Silk Road. 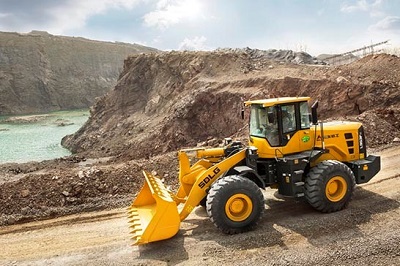 Infrastructure development for the Belt and Road Initiative (BRI) spans several regions, including Asia, Europe, Africa and the Middle East. Worth US$900 billion, these infrastructure projects are either part of the Silk Road Economic Belt — a half dozen land corridors connecting China with Southeast Asia — or the 21st Century Maritime Silk Road — a sea route linking Asia, Africa and Europe.

Wherever the project is located, chances are an SDLG machine is nearby. From motor graders creating flat road surfaces in Malaysia to wheel loaders handling cargo at a South African port, SDLG machines are commonly used in regions linked to BRI. We look at five cases from Southeast Asia, Africa and the Middle East:

Portside bulk handling in South Africa — An SDLG LG958L has clocked over 5,000 hours of operations at a portside bulk-handling facility in South Africa. With 2.5 million metric tons per annum of dry bulk — or cargo — that passes through the Port of Durban, one particularly tricky material that the wheel loader must handle is fluorspar, which weighs a hefty 1.4 t/m3 because it must be stored and handled while moist. The wheel loader, however, has been excelling at the task without breaking down, impressing the owner, South African Bulk Terminals. With ports a key feature of the 21st Century Maritime Silk Road (the Kyaukpyu port in Myanmar and the Hambantota deep sea port in Sri Lanka are two examples), SDLG wheel loaders like the LG958L, with their cost-effectiveness and reliability, are presenting themselves as good options.

Large order capability in Saudi Arabia for road projects — BRI projects can be massive. Furthermore, with an often-small timeframe between winning a project and starting work, contractors must have the ability to quickly procure large quantities of equipment and get operators up to working speed. SDLG has proven it can fulfill large deliveries, supplying 58 machines in 2016 to Shibh Al-Jazira Contracting Company. The company subsequently dispatched them to various road projects across Saudi Arabia.

Road infrastructure in Malaysia — Roads contribute to vital transport infrastructure, providing connectivity not just within a country, but also among countries and regions. Many developing countries in the BRI regions have underdeveloped road infrastructure, and the availability of cost-effective and reliable road construction equipment is essential to meeting project demands while keeping operating costs low. One piece of vital road construction equipment is the motor grader, which creates flat, smooth surfaces. In Malaysia, SDLG’s G9138 and G9190 motor graders have demonstrated their efficacy on a job site, maintaining service roads during earthworks in addition to actual road construction.

Producing asphalt in Indonesia — Actual road construction might be done by motor graders, bulldozers and pavers but, behind the scenes and before work can begin, necessary materials such as asphalt must be available. To produce asphalt, material-handling equipment like wheel loaders can play a vital role. For large-scale road construction, such as the Trans-Sumatra Toll Road in Indonesia, which is as big as, if not bigger than, some BRI road projects, the input of materials can be especially high. Keeping up with demand for asphalt for this project, the contractor for the toll road entrusts an SDLG wheel loader — the LG958F — to carry sand and raw aggregates from its quarry to its asphalt mixing plant.

Energy infrastructure for Indonesia — Building up energy infrastructure is one of the features of BRI. Along the Belt and Road routes are important energy-producing regions such as Russia and Central and West Asia, as well as energy-consuming regions such as East Asia, South Asia and Europe. BRI is an opportunity to develop energy infrastructure, whether production centers or delivery channels, and equipment is required in both energy-producing primary tasks and secondary support tasks. In Indonesia, for example, SDLG wheel loaders situated at an oil field have proven themselves capable in a support role, recycling mud and soil that are produced in the process of oil extraction into cement. The machines load the mud and soil onto trucks, which bring the materials to cement mixing plants. The mud and soil are used as ingredients in cement production.

N.B. While the above-mentioned projects are not strictly BRI projects, they are in BRI regions and are samples of the kinds of projects commonly associated with BRI.
Previous:SDLG’s new head of business in India targets market share growth for wheel loaders and motor graders
Next:Five ways SDLG is boosting profits on the Belt and Road Initiative